Tropical Storm Hanna flew through here Friday night with lots of wind and rain and very little drama. We realized how ill prepared we were Thursday night and each hit the market to stock up on things. We survived that rain, but not sure we survived Rain and her penchant for BBQ.

Being a good Filipina, Rain loves the pig. It was only fitting then that we try out a few good BBQ places during her visit. I gotta say…BBQ is 1/3 the food, 1/3 the service and 1/3 the atmosphere. Regardless, I am still full. 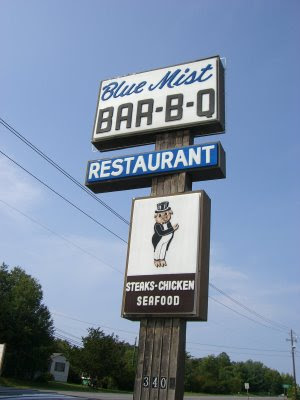 First stop – the Blue Mist Bar-B-Q in Asheboro. As soon as we walked in, we knew it would be interesting. We were and remained the only non-locals in the place. A cloud of BBQ scented cigarette smoke lingered in the air as we walked over to a well-worn booth. “You girls want breakfast or lunch?” sang out a heavily accented voice. “Lunch it is.” I immediately noticed a very large man sitting behind Rain, as he was grinning like a clown and waving frantically at me. This ought to be interesting. He got up a few minutes later and came over to us offering up sticks of Big Red. “He’s called Big Red, ya know”, said the aging woman with him. 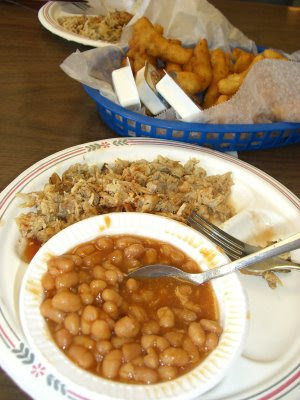 We smiled nervously and he moved on. The food at the Blue Mist was fine…lots of it on paper plates and nice waitstaff. We were given enough hush puppies to cause a corn bread shortage and I felt a little bad leaving so many behind. (I do expect they were just given to the next people sitting there.) I have to say that it was a little hard for me to eat through all the smoke. The guys that took up the booth that Big Red vacated basically smoked before, after and DURING their meals. I had never seen anyone hold a cigarette so deftly while spooning in banana pudding.

Two days later we were off the wagon and headed to Bullocks in Durham. The setting is a bit like Perkins and you’d find the clientele in either. I was thinking there must be a convalescent center nearby, but no matter as the food was damn good. I completely broke down and ordered mac and cheese with my meat and it was everything I could have hoped for. I can’t recall the last time I ate the real thing and it was soooo worth it. The waitress was a riot and kept coming over to check on her “girls”. 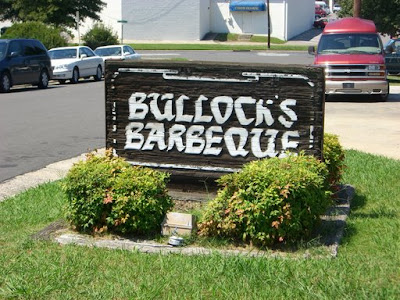 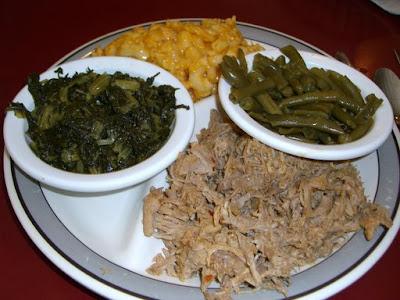 That night was Rain’s last and the girl requested more of the Eastern Carolina pig, so we headed into downtown Raleigh and The Pit. This was certainly the most upscale of the two, while the prices were still great. I honestly couldn’t handle any more pork so I went with the BBQ Turkey and it was divine. Their tag line is…”Everything but the squeal”. I highly, highly recommend, although I would suggest not going after you’ve literally consumed a year’s worth of BBQ in two days. I am still detoxing with the Boca burgers.