We fought bureaucracy today and won! Well sort of. I am still driving around with expired California plates and I expect to continue doing so for quite some time. The DMV here is antiquated and I am too tired to fax things at this moment to VW. But enough about that, as this post is about victory. We went to City Hall today and Michael very calmly and articulately described why we needed to legalize our oh-so-non-compliant property setbacks. He wouldn’t let me speak to the city council because he thought I might scream out…”Seriously, do you think I BUILT THE HOUSE IN THE EARLY 1900’s ON THE PROPERTY LINE?” “Do I look like I would do such a thing?” “You let the people next door build a giant peach box on their adorable bungalow, so why can’t I build a tasteful addition to my Victorian?” I am just grateful he let me come along.

So I was mute and approval was granted. This does not, by the way, mean that Michael won over me. This was joint victory, even though I was not so gently gagged during the winning. This DOES mean that we can apply for construction permits in 10 days and then start construction! YAY. In the meantime, we still had some dirty work to do. 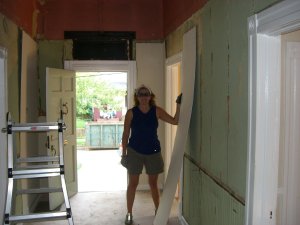 I ripped down all the paneling in the foyer that was (for some crazy reason) covering some beautiful and original wainscoting. Michael took the brunt of the grime (he was jet black) by removing a portion of a closet ceiling next to the fireplace. We are putting the new HVAC in the attic and the crew needs a proper way of getting up there. In the process Michael discovered that all our internal doors are held together with homemade giant nails that I don’t think a tetanus shot will save you from. He also found a ton of fabric samples for Fancy Silk Striped Worsted Suits from the Spring/Summer line of 1908. There are about 60 cards and they have THE BEST NAMES for the fabric…would you like your Summer wardrobe to be made from Disguise? How about Disfigure? Or Dislocate? Is Corrosive more your taste? It is so deliriously creepy. A nasty tailor with a sense of humor. 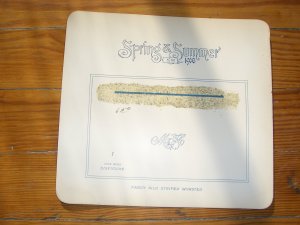 In addition there was an envelope stuck in the ceiling of the closet that was addressed to Mason & Hanson, 79 and 81 Spring Street in New York.

Thanks to the magic of the Internet we discovered a few fun facts this evening. Mason & Hanson were “artistic tailors” specializing in Woolens and Tailors’ Trimmings. The dates we found them operating were from 1905-1921 and they had offices in Chicago and New York. I absolutely love this stuff. 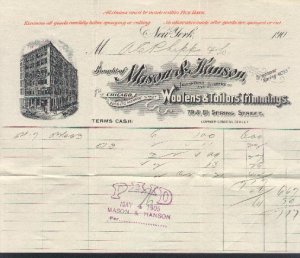 I suspected that our house was older than the first recorded deed of 1924, and this just cemented it. Back to the Internet and I found this fabulous paragraph about our house used in the petition to grant the Glenwood-Brooklyn neighborhood national historic registry by the United States Department of the Interior (how cool is that???):

So there. 1911 and it has a name. I am loving, loving, loving this. It is like winning at Scrabble and Monopoly and Uno and Spoons…all in the same afternoon…while intoxicated. And you all know I could so do it too.