That was the headline on WRAL’s website last night as I was preparing to leave work. Michael had texted me earlier saying that he and Iona were sitting on the porch watching the storm roll in. His subsequent posts to me looked something like this:

By the time I left the office, I was met by just a lot of rain and very dark clouds. I basically followed it, while Michael was in it. When I reached the house the storm had passed. This bummed me out a bit, as I LOVE STORMS. It was probably good that I wasn’t home though, as there would have been no place for me. Michael and Iona were sitting in the big clawfoot tub and I doubt there was room for another. Poor Iona has had quite the trauma these past few months. I am so thankful Michael was with her, as she was an absolute wreck.

I did ask Michael where Chupa was in all this, as he hadn’t thought to bring her with him and the dog. No worries…while she hadn’t been invited, she apparently strolled into the bathroom to check out what they were doing and then decided it was boring and went back to bed. Gotta love a cat’s indifference to danger.

I didn’t take these photos, so I must give credit to WRAL. These were taken by people not in bathtubs. 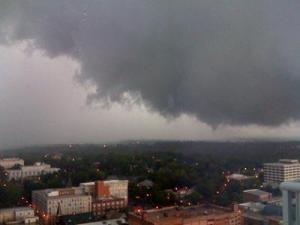 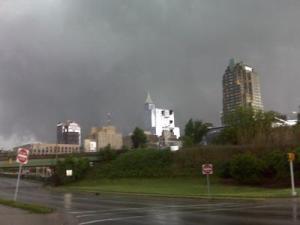