As I mentioned on Sunday, I’ve been experiencing a few cases of mistaken identity lately. On Saturday I was at Costco and several people wished me a Happy Mother’s Day. In fact, one woman seemed to go out of her way to express that and kind of chased me down through the aisles. I expect that I was mirroring the uncomfortable and confused expression that her husband had. This misplaced HMD salutation continued on through Sunday, and was only stopped when I just locked myself in the house and refused to go anywhere else. These women do not have a special sensory gift; I am not pregnant.

The true identity crisis actually started a couple weekends back when we attended the World Beer Fest in downtown Raleigh. Imagine a beautiful and warm day with tons of people strolling through two large tents drinking all the two-ounce pours that they can handle. And then they drink some more. The idea is that your $40 admission gives you an opportunity to taste beer across a wide range of both microbreweries and more standard brewing companies. You can compare and contrast and savor, or you can just drink until you fall down. Totally your call.

I was initially worried about the event, as there were a lot of drunk people in a relatively small space. Michael is not a fan of these situations, and I really did want him to enjoy himself. We needed a strategy. The key for Michael is to quickly get him alcohol in his body, and then find a quieter location where he can breathe and not want to run through the crowd with a machete. Sounds simple, right? Our friend Dwayne made a few beer recommendations and gave us the lay of the land, and then we were off. 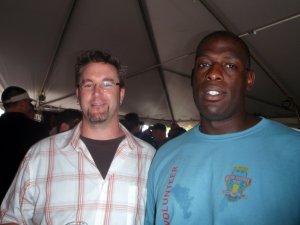 I still have these moments where I think I am in LA. Then the reality comes crashing back. On this particular Saturday, it was much more likely that we were in Wisconsin. As Michael pointed out, “It is not an event until you see someone walking around with a giant turkey leg.” We also discovered that Leinenkugel Brewing had a stand, so of course we needed to sample. You know you are from Wisconsin if you can spell Leinenkugel and know where Chippewa Falls is. Dad is very proud. 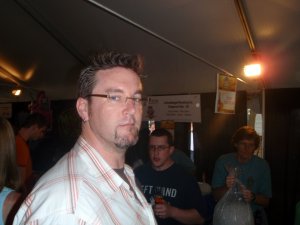 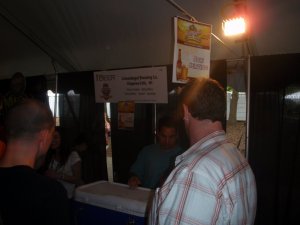 Then we made a true and blessed discovery. The Education tent. Here you sit and learn about beer, and they BRING YOU SAMPLES. You sit, you listen, you learn, you drink. And husband is not enraged, and therefore i am not annoyed. Good day. There were three such sessions and they poured 6-7 beers in each. Yes, I was hammered. You see, at one point early in the first session, the pouring woman spilled beer down both my legs. Turned out to be a good thing, as she then overcompensated and poured me tall ones thereafter. Michael unfortunately got “the short pour”. 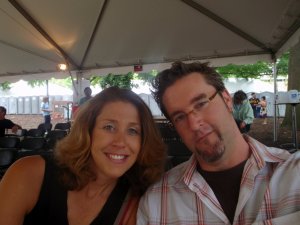 During one of the last sessions where I was content and a bit “saucy and sassy” as some friends have pointed out, I had the real moment of mistaken identity. A delightful older Southern man walked up to me and said, ” Thank you. Thank you for dressing like a lady, and having a dress on. Thank you.” 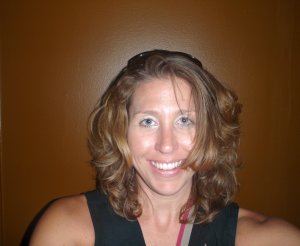 Oh yes, doesn’t she look all lady? You sir, are wrong, but I dearly thank you.