Hashing is like Fight Club. You go out at night and show up at work the next day all fucked up.

No truer words have been spoken recently. Apparently this was the conversation that was going on the other night at the weekly hash (recall moment: hash = drinkers with a running problem). Appropriate and true because of Michael’s recent trail experience. Something to do with stepping on a branch and getting hit in the left leg, and then later and completely separately twisting his right ankle and falling down. So on one leg he has a giant gash, (don’t poke it, he gets mad), and on the right he has the below mess. WARNING! WARNING! On a good day Michael does not have pretty feet. Now he has a purple and swollen mess. Do not look if you are foot squeamish. I personally hate feet and love my otherwise cute husband. A paradoxical mess.

On with the foot. 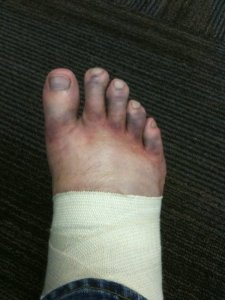 Tomorrow he is headed to his doctor to get this checked out. I would love to be a fly on the wall when Dr. Rekuc realizes that his 11.15 is the jacked up man who was just in his office less than 3 weeks ago. For freaking esophageal dysphagia. And before that was Rocky Mountain Spotted Fever. This messed up patient that until 3 months ago he had never met, and now probably wished he hadn’t Or perhaps the good doctor will simply shake his head and sigh. Tomorrow we will know for certain.

Michael is also frantically itching his calves from poison ivy. From the knees up I find him damn sexy. Knees down…yeah, not so much. And let’s not neglect the fact that his nasty foot is currently being elevated on my beautiful silk covered pillow. Oh, will this foot pain never end?