Sins of the Father

I have inherited many things from my father….some amazing qualities, and some that prove more challenging. More importantly though, I have learned a lot from my dad. And most of these things I have demonstrated to be productive, inspiring and instrumental in my success as an adult. And that includes his teachings about beer.

Several of our friends and my coworkers volunteered last Saturday at the World Beer Festival in Durham. Although I still wasn’t feeling well, the day was quite fun. My friend Valerie and I decided to be beer pourers, which basically meant that we set up a booth with buckets, ice and beer, and then poured 2 ounces of said beer into many, many, many small glasses. 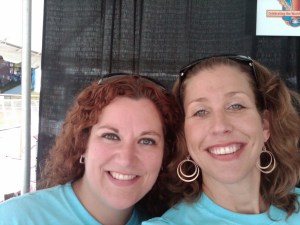 When asked which beer booth we wanted to volunteer at, I didn’t have to consider for very long. Where am I from again? Oh yeah, Wisconsin. What beer does my dad really like? That would be Leinenkugels. Where are they from? BRING IT ON, Chippewa Falls, Wisconsin. 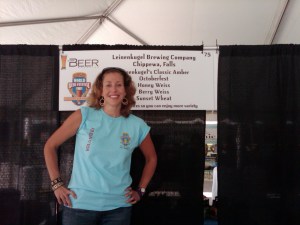 Leinie’s must have known that a local girl was working their table because they didn’t even send a rep down to tell us about the beer, educate us on the seasonal brews, or provide any information what-so-ever about the product or the company. No problem, I can handle this. And handle it we did. I ended up talking to many Wisconsinites who wanted to trade tales about our happy state and all the things (Leinies included) that they cannot procure in abundance in NC. It didn’t take long for Valerie to start lying and say that she too failed from cheese land. Apparently when you are drunk, a Southern accent sounds remarkably similar to my native tongue.

Each session of the festival lasts 4 hours and ours started at noon. The first hour is filled with a variety of people – those that just want to drink, those that are particular about what they try, and those that are seriously there to taste and score the selections. By the second hour, the inebriation sets in. By the third, EVERYONE is drunk. At the fourth, people no longer care what they are drinking as long as they believe there is alcohol in it. At this point it was very clear we were running out of beer, and I was a little worried that people were going to riot our little table.

Thankfully one of the guys at the booth next to us thought we were cute and really had a thing for redheads. That meant he firmly positioned himself between Valerie and I, and kept our tubs iced down and full of cold beer. Keep in mind that I don’t know if we could have kept the masses happy without him. We ended up running out of all but one beer with an hour still to go, and ALL beer 30 minutes later. And the drunks kept coming.

All told, we opened 192 bottles and poured over a 1000 two-ounce tastes. All while fending off lots of leering drunks who did not mind that I am married or Valerie has a boyfriend. My favorite remains the distinguished gentleman that owns a local pizza place and was easily the age of my dad. He came around at least four times to just stand, look at me, and then remind me to “save him a slow dance”. It is no wonder that by 4p, I was tired, still laughing, and needing a drink.